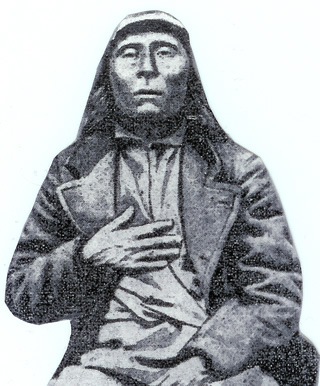 WAR CHIEF PAULINA The meanest, most murderous and one of the cleverest Indians in Oregon’s early settlement days was Chief Paulina. Paulina was a renegade Shoshoni Snake Indian from the Walapi tribe. There are some who will say he was a Paiute, but no matter, he was feared by the white man and other Indians as well.

Back in the day, in the mid 1850’s to 1860’s there were many Native Americans who did not wish to treaty with the settlers, coming in ever increasing numbers to the Oregon Territory. Tea-nan’ad, roughly translated to Buffalo Brush, as he was known in his native language, was one who would not hold to any peace treaties. He maintained a residence, in a lava labyrinth called Skull Hollow, a basalt maze. Unfortunate victims would be relieved of their heads, only later to be posted on a spear, at the entrance of the hideout. This served as an effective rendition of an Indian No Trespassing Sign, as there were many heads on display.

He made war on less hostile tribes such as the Chinook Indians as well as the Modocs, who certainly were no friends of the settlers either. It is said that Paulina, nobody is really sure where this name came from and there are several versions of it, found the killing to his liking and that it became an end in itself. For nearly ten years he raided up and down the Central Oregon territory, ranging from the Klamath basin, up past Madras and east beyond Prineville, out to Canyon City. To get the rest of this story and many more, join us on the Paulina Plunge!